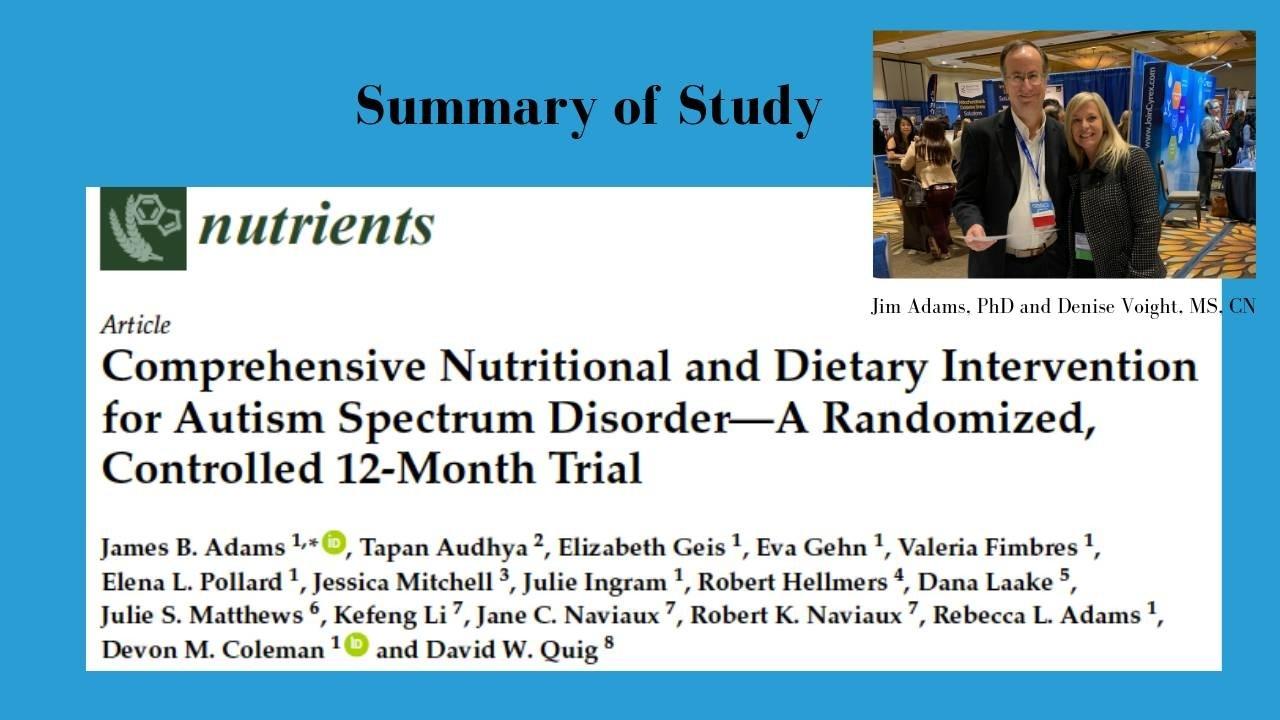 A recent clinical study showed that improving nutrient intake and the overall diet targets symptoms of autism spectrum disorder (ASD) such as anxiety, mood fluctuations, hyperactivity, aggression, and lack of focus, among others. The lead researcher, James Adams, PhD evaluated the effects of the following dietary intervention on ASD symptoms:

Furthermore, carnitine supplementation boosts energy levels and promotes the removal of harmful substances that contribute to cell damage and the worsening of ASD symptoms. In addition, supplementation with digestive enzymes improves digestive health by enhancing nutrient absorption and relieving stomach discomfort, which is important, as gastrointestinal problems can predict autism severity. Finally, a diet that is free of gluten, casein, and soy disrupts the production of opiates in the body and prevents them from traveling to the brain where they can cause concentration problems, brain fog, inflammation and constipation.

The 1-year study involved 117 participants who were split into three groups:

Each group was comprised of men, women, and children whose ages ranged from 3 to 58. None of the participants were on a special diet, and none had taken supplements two months prior to the study. The only group that received the dietary and nutritional supplementation was the ASD intervention group.

After one year of dietary intervention, the following outcomes were observed:

One individual who participated in the clinical study improved so rapidly due to the dietary intervention that she no longer required the use of a wheelchair, another was able to discontinue the use of a catheter, and one child participant stopped eating non-food items, which is a factor that can actually be life-threatening. Additional outcomes that were important included heightened interactions between the participants and their loved ones, increased displays of happiness, less aggression, and an enhanced quality of life.

A few participants experienced adverse effects, which indicated that this type of intervention should be tailored to each individual. However, for the most part, the outcomes were overwhelmingly positive. For years, the medical community has argued that clinical evidence which demonstrates the benefits of improved diet and nutrient supplementation for people with autism is lacking. This perspective unfortunately led to conventional treatments for autism that typically involve prescription medications which may cause various side effects. This clinical study proves that taking dietary supplements (e.g., multivitamins, fish oil) and enhancing the overall diet dramatically improves the quality of life for individuals with ASD. More importantly, it demonstrates that supplements can address nutrient deficiencies and effectively target ASD symptoms.

It is pretty amazing what the body can do to help heal itself when given the nutritional support needed for proper biochemical function. It is very difficult to find a high potency, quality multivitamin mineral supplement over-the-counter, which is why I formulated My Spectrum Heroes™ Multivitamin Mineral Plus. I wanted my clients, patients, and followers to have access to a superior nutritional supplement specifically designed to support individuals on the spectrum, without the unwanted ingredients that can aggravate ASD symptoms. Please visit www.myspectrumheroes.com for more information about nutritional supplements for autism and ADHD.

Food Allergy vs Food Sensitivities/Intolerances. What's the Difference?
What is "Leaky Gut" and Could it be the Cause of Your Child's Symptoms?
Covid-19 Immune System Support for ASD and ADHD
Close